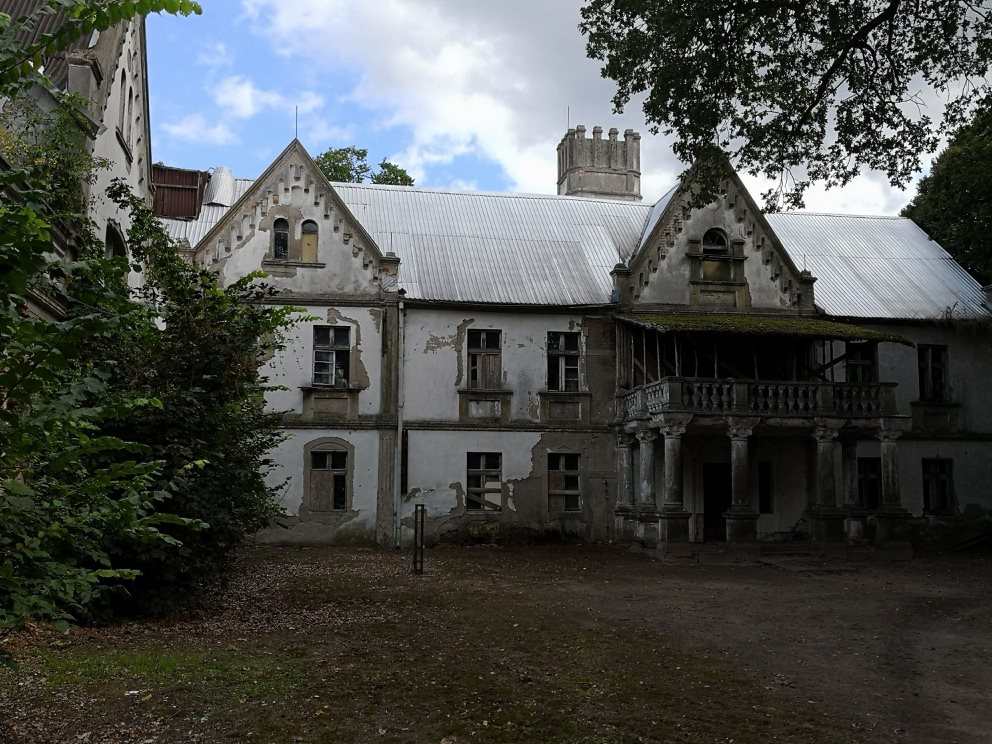 The eclectic manor house was created in 1904 by rebuilding and merging two former manor outbuildings or an outbuilding and a manor house. The work was carried out by the then owner, Władysław Szczepkowski. It is a vast, two-storey building set on the projection of the letter L, covered with a gable roof, with a columned porch preceding the entrance and carrying the terrace of the first floor.

Like  many of such objects, after the breakthrough of 1989 the palace hasn’t been lucky with owners. The former one neglected it severely, the current one, a large meat manufacturer Mroz S.A., has rather concentrated their efforts on fighting the Provincial Conservator up to the highest instance, than on doing anything to improve the condition of the building.

Over the last two years, a total of three inspections of the building have been carried out on the Foundation’s initiative – the last in June 2021. The inspection revealed progressive damage to the historic palace, resulting from a lack of any renovation activities. In view of this, the Wielkopolska Voivodeship Conservator of Monuments sent a notice to the District Prosecutor’s Office in Śrem on the possibility of committing a crime involving damage to the historic palace building. This is an offence provided for in Article 108 of the Act on the protection and care of historical monuments, punishable by imprisonment from 6 months to 8 years. We are convinced that our consistency will lead to those responsible for the current state of affairs facing further legal repression, and – most importantly – that we will succeed in halting the progressive degradation of this beautiful and valuable building. As you can see, the activity of the people involved in the work of the Foundation brings measurable results, which is our great satisfaction and a driving force for further action.